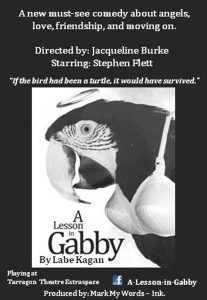 In six weeks the Toronto Fringe will see the debut of Labe Kagan’s comedy “A Lesson in Gabby”. There have lessons and light and angels in bringing this witty piece of theatre to the stage.
It is the story of Groucho, a nearly successful playwright, who is searching for his place in the arts, in relationships and in the life. Groucho shares this experience with the his friend and sometimes muse – Melville.
In real life, Labe (the writer) and Mark (the long time friend of the writer) have shared the journey of this most wondrous path to the stage of the Tarragon. It has been filled with laughter and light, darkness and daunting challenges.
In this production, Mark has assumed the role of producer and Labe, as the creator of this piece of work, has been an instrumental co-conspirator in seeing to it that this effort meets with the intended success.
As we began our first bout of the serious rehearsals – one of our actors announced his departure, due to personal and business conflicts. Though we were sorry to see him go and he was sorry to leave, we immediately scoured the thespian landscape for a talent equal to the high bar set for this role. This being a two-hander and Groucho being the protagonist, we were charged with replacing fifty percent of the cast. Jacqueline Burke, our director, lead the way. Not only was the role filled, but we found a wonderful talent and interpretation in the person of James Robert Woods.
Now with the sparring and sparking of two very skilled actors, Stephen Flett (Melville) and James Robert Woods (Groucho) and the keen and adept direction of Jacqueline Burke, complimented by the positive energy and professional ability of our stage manager – Andrea Wicken – we have an exceptional show in the making.
This is a show you, will want to see. It is show you will want to tell your family and friends to see.

Here is a look at the times, dates and location for Mark My Words-Ink production of Labe Kagan’s comedy – A LESSON IN GABBY: